A Guide to Keras Functional API

Keras means many different things. At the time of writing this article, Keras can refer to one of three things:

What does this article cover?

There are other Keras objects such as Network, Initializer, Optimizer, Callback but the fundamental objects listed above are the only ones important enough to deeply understand Keras. We describe Keras Tensor and Layer in this section and describe Model in the next section.

Keras Tensor is commonly generated by the Input function, like this:

According to the documentation in the code:

A Keras tensor is a tensor object from the underlying backend (Theano, TensorFlow or CNTK), which we augment with certain attributes that allow us to build a Keras model just by knowing the inputs and outputs of the model.

Keras tensor x has the same type as a TensorFlow tensor (since we used TensorFlow backend), as shown below. However, what makes x a Keras tensor is the existence of Keras-specific attributes such as _keras_history1.

A Layer defines a transformation

Typically, we generate a Layer object by calling the default constructor of the corresponding class.

Activation layer, expectedly, does not have any weights associated with it, even after calling its __call__ method.

Note about Input and InputLayer

Even though we Input lies within keras.layers, Input is not actually a Layer object. Input is a function. Calling Input returns a tensor, as we have seen above. Input function calls the InputLayer class, which is indeed a subclass of Layer. InputLayer instantiates a tensor which is returned to us as the output of the Input function.

When using a backend (such as TensorFlow), we build a graph that describes computation we intend to perform. This graph may be generated implicitly when eager execution is used or explicitly (such as with sess.run() in TensorFlow).

Even though Keras hides a lot of low-level backend complexity, Keras computation is still based on a graph. Understanding this Keras graph is important to fully understand the Functional API. In fact, by using the Functional API you are specifying a Keras graph. Typically, Keras graph is represented much more compactly than a backend graph. The pictures below show the Keras graph and the corresponding TensorFlow graph for the same network. 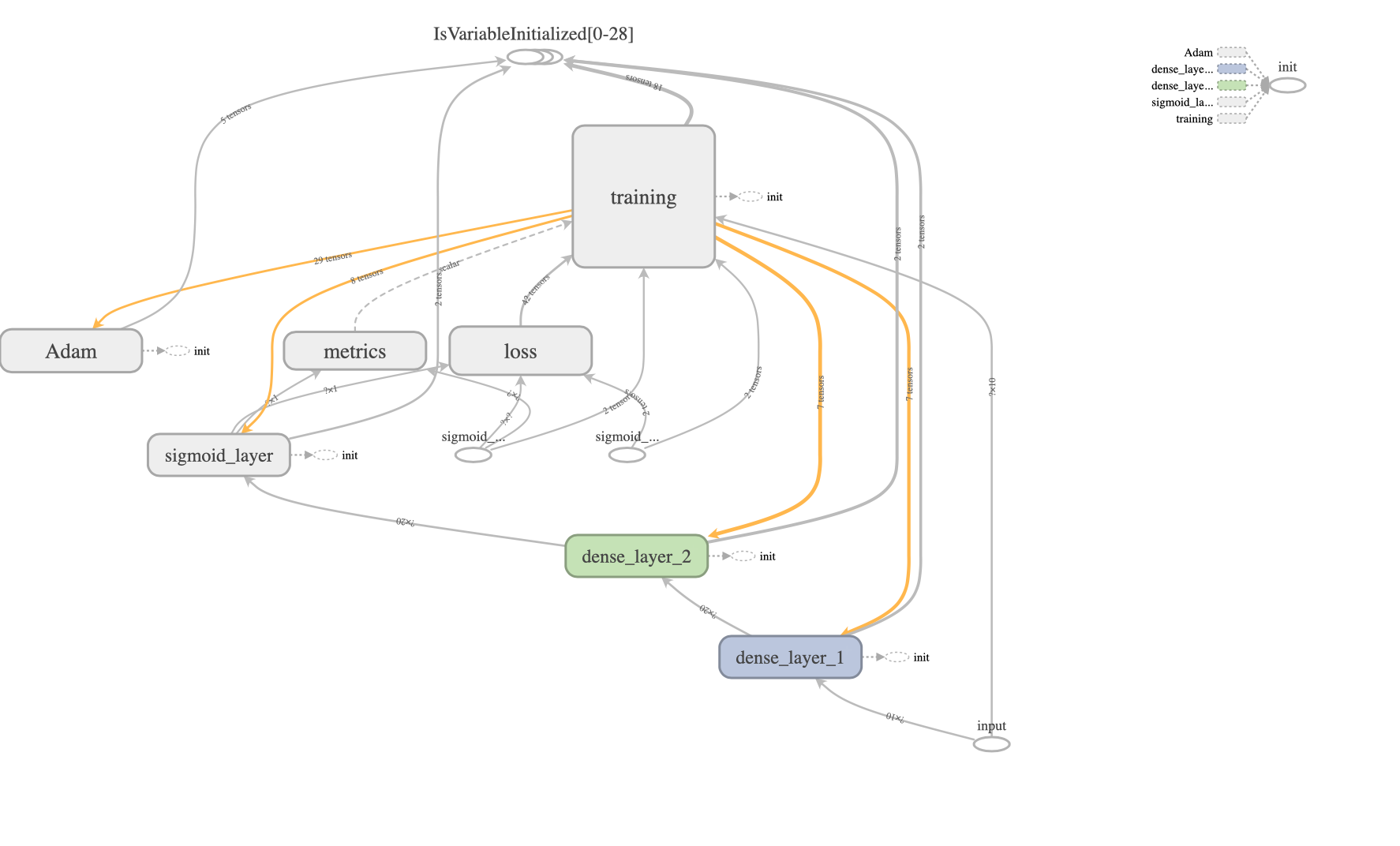 A graph consists of edges and nodes and Keras graph is no different. Keras graph is a directed graph4 in which layers act as nodes and tensors act as edges. Specifying the edges is straightforward – we simply need to create the Layer objects.

The above code simply specifies the nodes of the graph. Since we didn’t specify edges just yet, all the nodes are unconnected. We can visualize the current state of the graph as follows.

Keras graph is unconnected until a tensor is flown through it

Since dense_layer_1 has not been connected to an input yet, it can accept a tensor of any shape of the form (batch_size, n_units_1, ... ). The output_shape is also undefined at this stage but will be defined automatically once we provide an input to this layer. This is a benefit of using Keras – we don’t have to fully specify the input or output shape of a layer when we instantiate it. The shapes are inferred as we make connections.

This one line of code connects all the previously unconnected nodes in the order specified. This results in the following (weakly) connected directed graph. The InputLayer node is present because of technical reasons and is typically not important for the end user.

Keras graph is connected once a tensor flows through it

We have now fully specified the Keras graph. We can check that the nodes are connected using code, just like before. Note that dense_layer_1 now has both input_shape and output_shape attributes. These shapes were automatically inferred by Keras.

Once we have a Model object, we can specify the optimizer, loss functions, and metrics to track in the compile step. Model.compile is a method of the class and we don’t need to store its return value (which is None anyways).

The following code snippet shows that the shapes on the actual data (numpy arrays) and the tensors match. The first dimension is always the batch dimension; we will take about this and tensor shapes in detail in the next section.

The only thing remaining is to actually pass the numpy arrays into the model.fit function.

model.fit function accepts an argument x as the input training data. This argument x requires that we provide a list of numpy arrays in the same order as the list of tensors specified in the Model’s constructor (i.e., during model instantiation). The same applies to the y argument.

Beginner users find it difficult to correctly specify shapes of tensors and layers. One reason for this is that, in typical usage, Keras doesn’t ask you to provide the shapes of all tensors and layers explicitly upfront; instead, it does shape inference for you. Another reason is that the documentation is vague regarding tensor shapes. Finally, the tensor shapes are different for fully-connected layers, convolutional layers, and recurrent layers.

This is the most important dimension. Ignoring the batch dimension is also the most common source of error for beginners.

Batch size is the first dimension even when the "image_data_format": "channels_first". You cannot ignore the batch dimension even when you have a single (input, output) pair. For example, if we have some data where the input has 10 features and output is a binary label, we must specify both the input tensor and input numpy array as 2-dimensional, irrespective of how many (input, output) pairs we have.

To illustrate this, let’s define a very simple neural network as follows.

Let’s call the check_batch_size function with both the correct and incorrect input shape.

Keras is more forgiving when it comes to the shape of the output_numpy array. But it’s still a good practice to have batch size be the first dimension in output numpy arrays.

Batch size is not important for neural network specification. This is expected because typically we would like to run the trained model for one test example at a time; fixing the batch size to one particular number would make this difficult. We also often want to try out different (mini) batch sizes during model fitting. When generating an input tensor, Keras lets us choose if we want to specify the batch size up front or wait until the model training stage.

A tensor that interacts with a (2D) convolutional layer has one of two specific shapes.

The image_data_format is typically found in ~/.keras/keras.json. As an example, for RGB images of 64x64 pixels, we can expect to see something like this:

Typically, recurrent layers such as LSTM accept input of the shape (batch_size, input_sequence_length, vocab_size). The following examples explain the two common use cases.

This is the typical case in natural language processing tasks. Given a sentence consisting of five words, we encode the words (text separated by white space) using one-hot encoding. Let’s assume that we only have the four necessary words in the vocabulary.

In this case, the input sequence length is 5 and the size of each element of the input sequence is a one-hot vector of length 4. Thus, one input example is of size (input_sequence_length, vocab_size) = (5, 4) and there can be many input examples in a batch. The following code represents how to build an LSTM model to accept this input.

Note how we have set return_sequences and return_state to be False. The output of the lstm_layer is a tensor of shape (batch_size, n_lstm_units) = (None, 10).

Changing any of the arguments return_sequences and return_state to True would change the output shape completely7.

This example is in contrast to the previous example. This time, let us assume that we are trying to model a sequence of scalar, real-valued quantities. One example could be the stock price of one particular stock. We want a model that takes as input a sequence of 5 stock prices and outputs the next (6th) stock price. There is no need to encode the real-valued stock price8. The input data looks like this:

Even though the stock price is a scalar quantity, for LSTM, we will have to consider the stock price to be a vector of one dimension. The following code snippet shows the correct and incorrect way of specifying tensor shapes.

BatchNormalization layer is another common reason for shape-related errors.

The batch normalization performed by the BatchNormalization function in keras is the one proposed by Ioffe & Szegedy, 2015 which is applicable for fully-connected and convolutional layers only9.

Let’s consider the following simple examples. The input tensor to BatchNormalization consists of three examples in a batch; each example in the batch has 2 features.

Even though the two examples perform meaningfully different computations, the shape of the output tensor remains the same.

Thus, there is no way for us (or for Keras) to check if we have used the correct value for axis! Typically, when we perform batch normalization, we would like to average over batches and not features. Therefore, Example 1 is the more typical usage (by far) and represents the correct way to perform the commonly understood implementation of batch normalization.

The problem becomes worse when we have more than one feature dimension, as shown below.

The underlying code for BatchNormalization is the same whether it’s used for fully-connected layers or for convolutional layers. But, for convolutional layers, we need to consider the image_data_format when deciding the value of axis argument for BatchNormalization. The following table shows the usual values of the axis argument for both options of image_data_format.

For both of the cases above, BatchNormalization would preserve the channel dimension and average over the rest. This means that we would average over all the examples in the batch as well as the all of the pixels, together. While this may look like a mistake, this is actually correct. This behavior is actually what Ioffe & Szegedy, 2015 specified in their implementation for convolutional layers (see Section 3.2, last paragraph in Ioffe & Szegedy, 2015). The authors desired that the normalization obey the convolutional property such that different elements of the same feature map (i.e., channel) at different locations are normalized in the same way.

Keras is an excellent high-level API to build neural network models. Keras Functional API is powerful enough to let us build complicated models without having to descend into the low-level, backend API. While Keras documentation is vague at times, Keras provides sensible defaults and performs shape inference to discover mistakes at model specification time. I hope that this post provides some help with the vaguely documented sections of the Keras codebase and saves you some time and effort. If you notice any mistakes or areas that I have overlooked, please leave a comment and let me know.